If you’re currently using the microphone built into your webcam, it might be time to up your audio game. Whether you’re streaming for fun or working from home, the mics including with USB cameras aren’t the best around. While many laptops have noise-canceling arrays, desktop users with discrete cameras don’t always have the same luxury. For those who are conducting business with their webcams, or perhaps even aspiring streamers on Twitch; an upgraded microphone might be just the ticket.

First, here are some ground rules: we’re sticking to USB microphones here. They’re the easiest option to set up for most users. That means that if you already know you want a discrete audio interface or need the absolute best in low-latency recording, like producing music in a home studio, this isn’t the list for you. Ease of setup and bang for the buck are the order of the day. The quickest way to improve production values in any audio content is to have a well-placed, high quality microphone.

The next thing to keep in mind is microphone placement, because the best mic can still sound awful. The microphone should not be too close, as that will cause overdriving the input to cause clipping, or so far away as to pick up voices echoing around a room. Dynamic microphones are good for loud sources and near-field recording so they need to be close to the source, and tend to be the tool of choice for voiceover artists. Condenser mics on the other hand can pick up sound from a distance, but putting it too far away from a source will introduce room noise in an un-treated room. Anywhere from 12-24 inches of distance is probably fine for most condenser microphones, as long as it’s facing the source of the sound.

One quick and easy setup tip is to put the microphone slightly off-axis but aimed directly at the sound source. If you’re talking to a camera mounted on top of a monitor, this could be as simple as setting the mic below the display and aiming up towards your mouth. If the mic is directly in front of you, not only does it get in the way, but you can get some so-called “plosive” pops on certain letters, like P or T. A windscreen or a pop filter will cut down on pops, but getting it right at the source is the best solution. Check out the our own Two and a Half Geeks podcast, and you’ll see all of our hosts doing exactly that, and it sounds great.

Alright, so now that we know how to place our mics, let’s take a look at some solid options. While there are cheaper options around, we’re sticking to high-quality mics at reasonable prices. Many of these are all-in-one units that also have a headphone output and direct monitoring so that a simple pair of headphones can hear both participants and yourself while presenting. 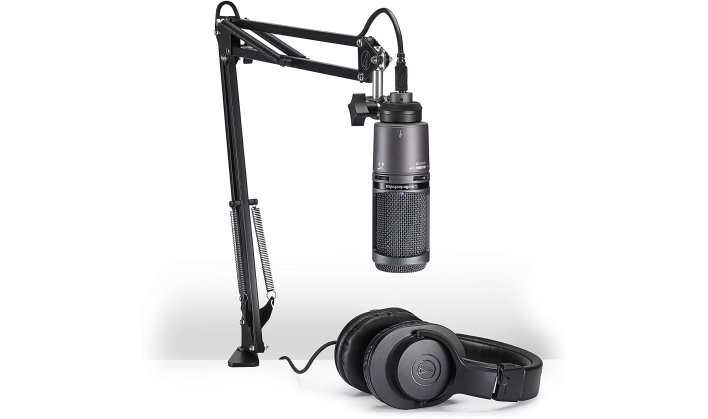 We’re starting with a microphone we know inside and out: AudioTechnica’s AT2020USB+, which is $149 on Amazon. This is the microphone that editors Marco Chiappetta and Dave Altavilla use for podcasting, and it sounds great. If you’re just getting started with upgrading your audio productions, this streaming kit pairs the AT2020USB+ with a desk-mounted boom arm and a set of ATH M20x headphones for a total of $199. That’s everything anybody would need to create some slick-sounding presentations. Incidentally, for those who are interested in audio production might want to check out the standard AT2020, which features the same large condenser microphone with an XLR connection for external audio interfaces.

There are several other USB microphones in the same price range. For example, Elgato’s Wave:3 for $143 combines the large-diaphragm condenser format with an integrated tilt stand that should sit perfectly in front of a monitor. The HyperX QuadCast is a gamer-focused USB condenser with its own integrated stand. This one doesn’t seem to have any tilt adjustments, but can rotate on its base. The Rode NT-USB costs a few dollars more, but has its own tilt control as well as an integrated pop filter for $169. All three of these have integrated headphone output, too, so hearing what’s going on is a snap. 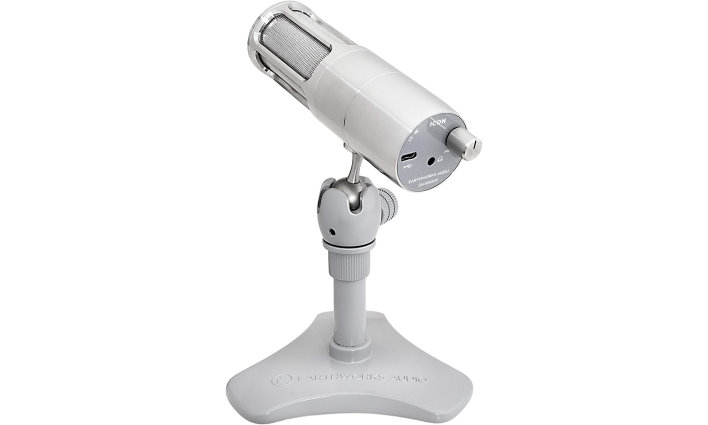 AudioTechnica and Rode made their names in recording studios and moved into consumer gear, and that’s also true of Shure. The company makes legendary studio and live audio microphones like the SM-57 and SM-58, as well as the Beta lineup. The MV7 USB Podcast Microphone has many of the same features as the other mics here, including integrated headphone output. The price is a bit higher at $249, but it packs a dynamic microphone based on the high-end SM7B vocal studio mic’s own capsule. As a dynamic microphone, it’s meant for close proximity applications, so it needs to be close to the source. However, it should make for an excellent voiceover microphone.

Earthworks Audio also made its name in the studio recording instruments and vocals with flat response curves and low noise floors. The company’s ICON line of streaming-focused mics brings that to streaming setups. While most of Earthworks’ ICON lineup consists of XLR mics, the Earthworks ICON USB has a dedicated computer connection, a ball mount for flexible positioning, and a headphone output. Earthworks says that the ICON USB can reject off-axis audio without any external software tools, too. These extras come with a bit of a price premium, though. It’s $349, but for those who need it, this mic could well be worth the price tag.

Thanks to COVID-19, many of us have been working from home for a year now, and with more companies figuring out how to do so permanently, a quality microphone might be a good investment for a home office. And of course, entertainers like streamers and podcasters need to make sure their productions are high quality. It seems like no matter what line of work we find ourselves in, having a strong audio component is important.

PlayStation Plus: Everything you need to know

5 best free LastPass alternatives and how to transfer

Sport NEWS EDITOR - February 28, 2021 0
As the team finds itself with a 17-17 record, New York Knicks rumors continue to point in the direction of an impactful deal...

Videos NEWS EDITOR - February 28, 2021 0
Police have fired on protesters in Myanmar, on the deadliest day since rallies against the country's coup began. Source link